What Rail Signalling Is, a Visual Guide to Why and How

Written by Chris, updated Jul 27 2019 in accordance with our editorial policy.

Chris is our resident transport and rail engineer. He started his career designing, testing, and maintaining rail signalling.

What is rail signalling? Rail signalling is the directing of trains to ensure they do not collide. Signalling systems range from simple tickets to complicated communications based train control. All systems have the same goal in mind: To tell trains where to go while preventing them from colliding. 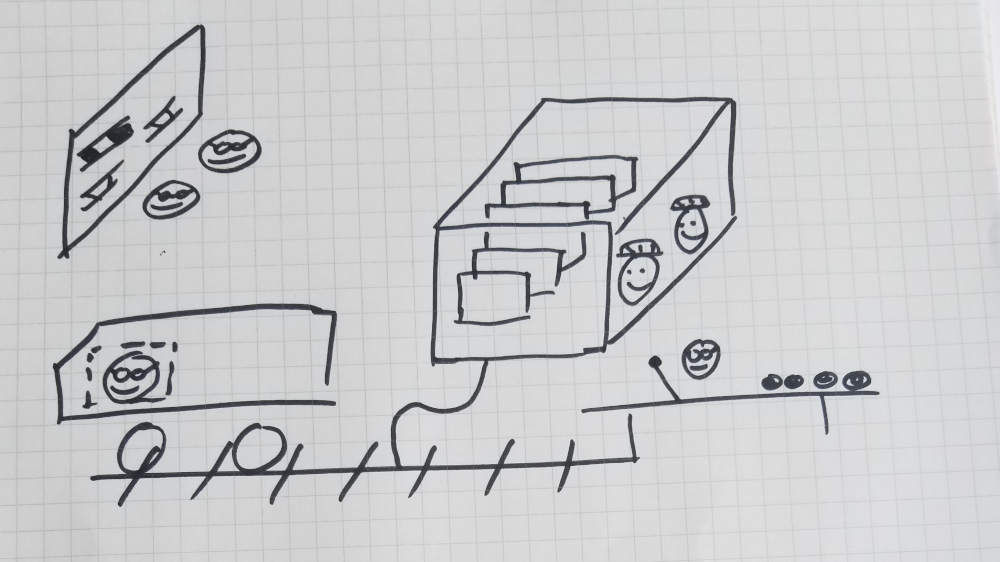 When I started working in rail, people told me signalling was a black art that they couldn’t understand. I’ve written here a simple introduction to modern rail signalling. From principle to people I give an overview of…

Driving a train is not like driving a car. Trains do not stop easily. Signalling tells trains when they can move to avoid collisions.

How does rail signalling work?

A rail signalling system works by helping people direct trains, and keeping those trains from colliding wherever possible. 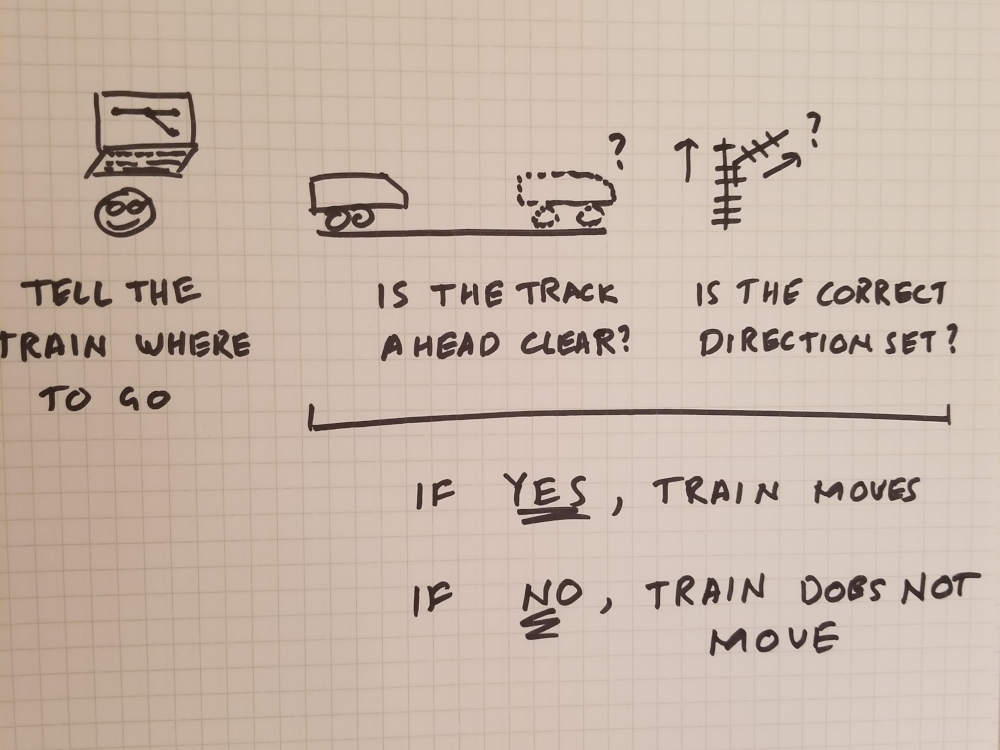 As long as the the track ahead is clear and the correct direction is set, the train can move forward.

A computer usually decides where the train needs to go. This route setting computer does so using the train timetable. The traffic controllers can focus on other things and not worry about directing every individual train.

Why do trains need to be ‘signalled’ 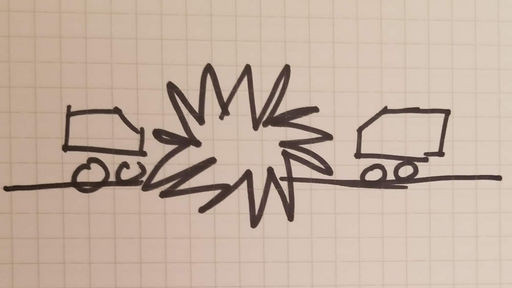 Trains need signalling to tell them when they can move forward, where they’re going, and only sometimes how fast the train should be moving.

The signalling system attempts to prevent trains moving forward when there might be an obstruction ahead. Moving when not allowed to results in collision. Trains cannot swerve out of the way like a car can.

Tell trains where to go and prevent them from colliding - this is the goal of any signalling system, whether that system is simple permission slips or a network of secure life-critical computers.

How complicated is signalling?

Not very! Rail signalling can be as simple as a signed piece of paper given to a train driver, or it can be a complicated mesh of Wi-Fi networks transmitting data to and from trains. 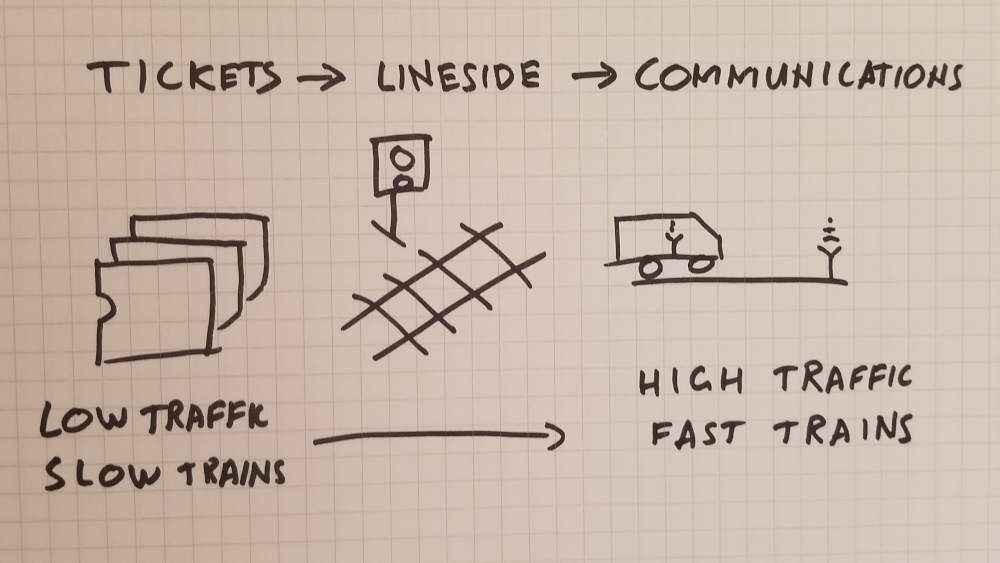 When trains don’t come very often, a simple way to ensure they don’t crash is to write them a permission slip to proceed. This is called a ticket.

A train that receives a ticket can drive through the section of track that the ticket was written for. The author of the ticket ensures there are not two trains in the same section.

Trains can also be given a metal staff. If one staff represents one section of the line, then any train holding that staff can be guaranteed to be the only train in the section of line.

The traffic lights for trains is the image that typically comes to mind when people think of rail signalling. These are the coloured lights that can tell trains when the train is allowed to move, when the train must prepare to stop, and only sometimes the direction or speed the train should travel at.

While each city I’ve worked in has different rules about what the combinations of coloured lights mean. In general, train signals mean:

Modern systems handling many trains can use Wi-Fi to give the train its permission to move forward.

Where is rail signalling equipment located?

Signalling equipment is located on the train, next to the track, or in a room, depending on what the equipment is and what it does. 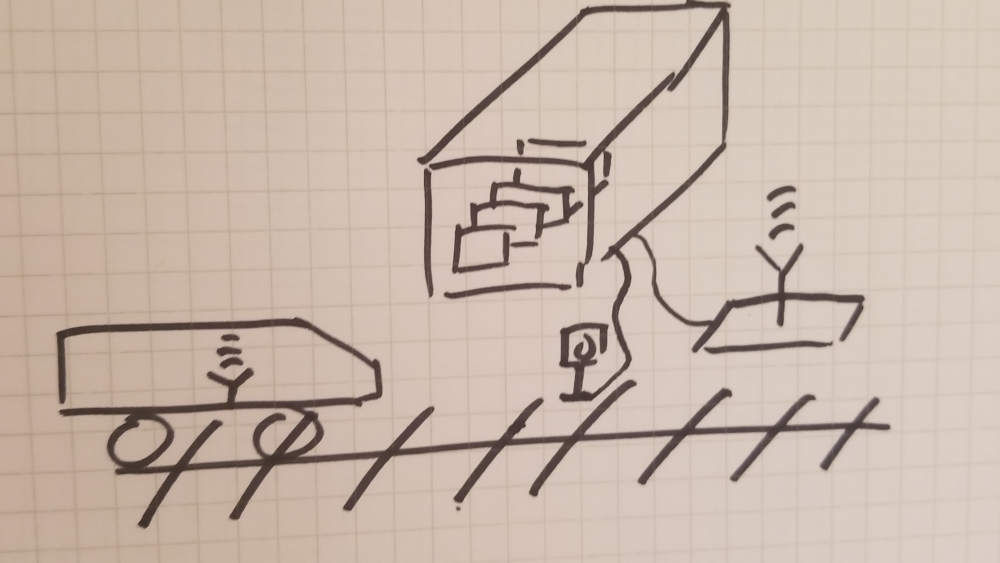 Track-side signalling equipment is similar to that of the train: It is used to tell a train driver whether there is an obstacle (such as a train) ahead, or which direction the train is going to take at the next junction. The communications devices, such as Wi-Fi, that talk to a train also sit track-side. Track-side equipment includes the machines that allow trains to change track. I wrote a more detailed explanation of how trains change track, click here to find out more: https://econstructioncareers.com/news-insight/how-trains-change-track

How much signalling equipment is there on a train line? 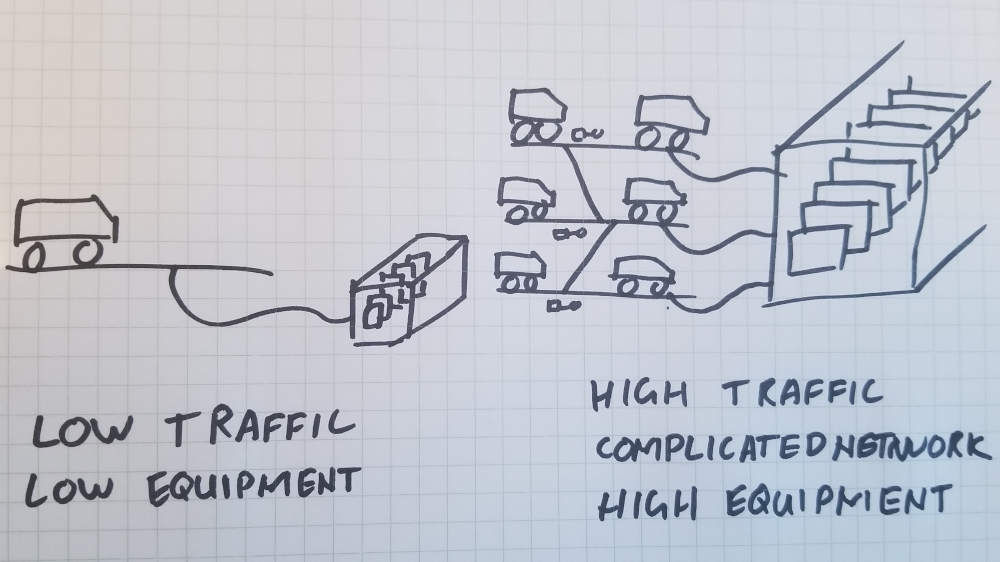 Slow trains that can stop quickly don’t need much signalling - these are typically light rail systems.

Lines that have low traffic don’t need much signalling - these can be hobby steam trains or tourist trains.

Fast trains need a lot of signalling - on a bullet train, a driver is moving too fast to see a colour-light signal by the side of the line, more equipment is needed to transmit that signal to inside the driver’s cab.

The people that work hard to run a collision-free rail network are: 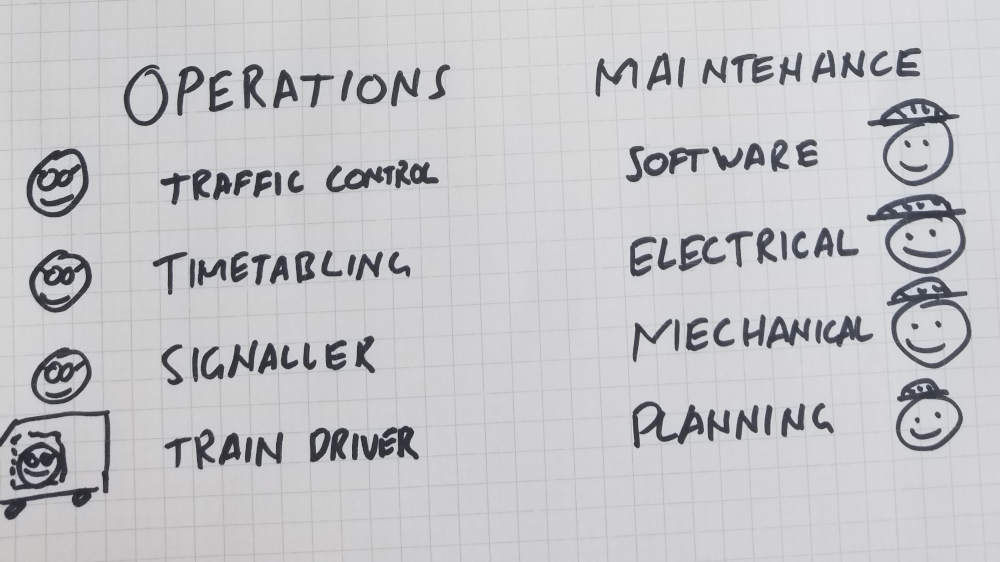 Where the jobs are, people who signal trains

These staff, and their colleagues, can be grouped into Operations and Maintenance.

I find that staff grouped under Operations are more susceptible to automation. Recently a former timetabler added me on LinkedIn, he was desperately searching for job leads. Writing timetables and calculating train position, even on a schedule that changed day-by-day, was no longer the task of a person. Writing timetables can be done by a computer.

For each of the positions listed here under operations, I have worked on a project that automates those people away.

Maintenance however, I can’t see that being automated any time soon. Read on to find out more.

What is a signal fault

A signal fault is when any of these parts, the track-side signal, the train detection, the machine the changes train direction, or the control circuits stop working. Signal faults are noticeable because trains stop moving when the signals can’t tell them it’s safe to move. This makes signal faults particularly noticeable to passengers.

In my experience, the two most common causes of signal faults are track circuits and point machines.

A track circuit is connected to the rails, when the metal of the train wheels breaks the circuit (by shorting it), the system knows a train is there. If for any reason the circuit is broken, such as metal on the track or loss of power, the circuit shorts and the signalling system thinks a train is present. If a train asks for movement authority into a section where the signalling system thinks there is a train, it will be rejected, or only be allowed at a snail’s pace speed. 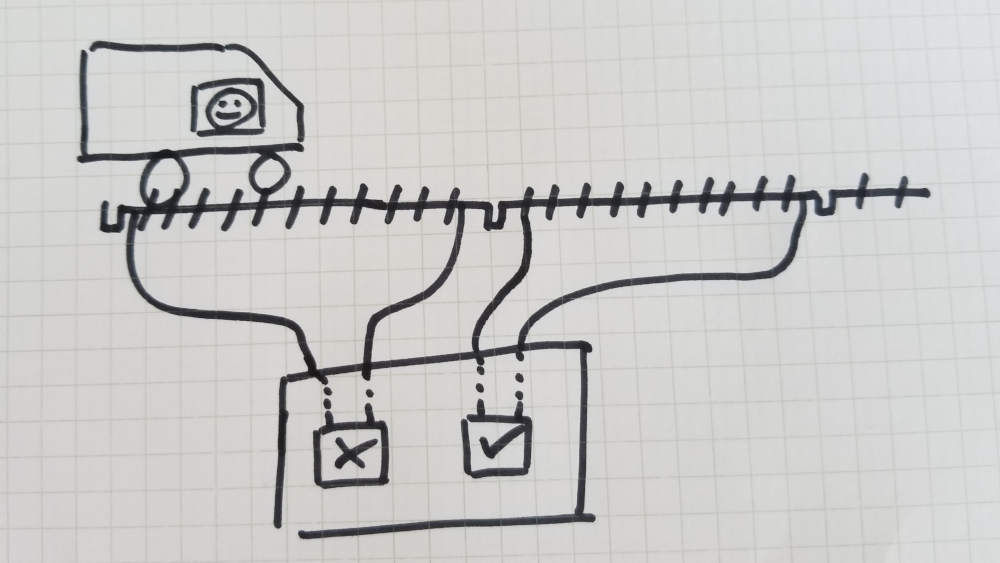 Trains use a point machine to change track. A point machine switches blades of rail from one direction to the other to force the train wheels along the selected path. The machine uses a complicated series of rods to move the blade, and then ensure the blade is held in position when a train moves over. If any of those rods don’t work correctly, a train will not be ‘signalled’ over the points - this is often called a signal fault.

What are the jobs involved in signalling

Safety critical electronics. This is the interface between the computer and the real world. Computer systems connect to the track, trains, and other inputs to calculate and drive outputs. If anything goes wrong, it could be fatal. If you’re interested in working with the boundary between computer hardware and the real world, rail signalling maintenance is a good place to start.

Powerful point machines. The machines that move blades of rail to change the direction of a train. Rail is heavy and requires a powerful machine to change the direction. The machine also needs to make sure that the rail is held in the right position as a heavy train bounces on top. This is done with a complicated system of gears and motors. I’ve also seen point machines that use air. If this sounds interesting, rail signalling also has you covered.

These are the jobs everyone thinks of when they think about signalling. People sitting at computers directing trains, train drivers themselves. These are also the jobs I most often see automated in new train lines.

I recently worked with a train company investigating the impact of automating the driving of all the trains. We found that upgrading trains to self-driving would remove 40 train drivers from the network. In doing so, the work load of the train controllers would increase, so they would need to add one. Self-driving trains removed the need for 40 train drivers and added 1 train control job in its place.

Rail can offer a great career, but in maintenance rather than operations.

What qualifications do I need?

High school education is usually the minimum needed to get started in rail signalling. Rail signalling is a specialised field and most operators know they have to teach anyone that joins the company how to do the job. That means there are jobs you can get started in with only high school education. Union Pacific for example has jobs available across the United States that only require English speaking and a bit of logical thinking.

University / College education can often require a bit of adapting before you get started working in rail. Not many universities over dedicated rail courses. A great way to get started in rail from a university background is to do a stint as an intern with a rail operator. Get in touch with an operator near you to see if they can take you on as an intern.

By focusing on the principle of rail signalling, that trains are told when to move only when they cannot collide, the black art of rail signalling becomes simpler. However you solve this principle, whether it’s with permission slips or million dollar safety-critical computers, you have a signalling system.