Written by Chris, updated Jul 14 2019 in accordance with our editorial policy.

Here are 11 industry insider terms I struggled with when I first started working in the rail industry. From consist to ballast, understanding these terms helped me move from new comer to productive rail engineer.

What is a consist? The set of carriages and locomotives that make up a train. Consist is used to describe the whole train, including the locomotive, carriages, and any works and maintenance equipment attached.

Why use the term consist? Words such as train and even engine can be ambiguous. What if you’re referring to a subway train? It doesn’t have a dedicated locomotive pulling it, some of the carriages contain the motors. Then if the subway train is called a train, there’s no general term that includes the maintenance train that workers use to maintain the tracks. Consist covers both the subway train and the maintenance train in one word.

Bogies, also known as trucks in America, is the part of the train that connects the wheels and axles to the carriage. The carriage sits on the bogie, the axles connect wheels through the bogie, and the wheels sit on the tracks.

Why do trains need this bogie arrangement? Trains use bogies to help them go around corners. The bogie pivots as the train rounds the curve, this way the wheels and the carriage don’t need to turn (like in a car). Bogies can also contain suspension for a smoother ride in the carriage.

I had a colleague who used to call these boogies. Picture the train dancing on top of its wheels, a boogie or a bogie.

When you hear of a train derailment it conjures images of broken tracks, smashed carriages, and the unfortunate accompanying casualties. Most derailments however are trains that simply came off their tracks. Some trains can even be derailed on purpose to prevent run-away collisions. 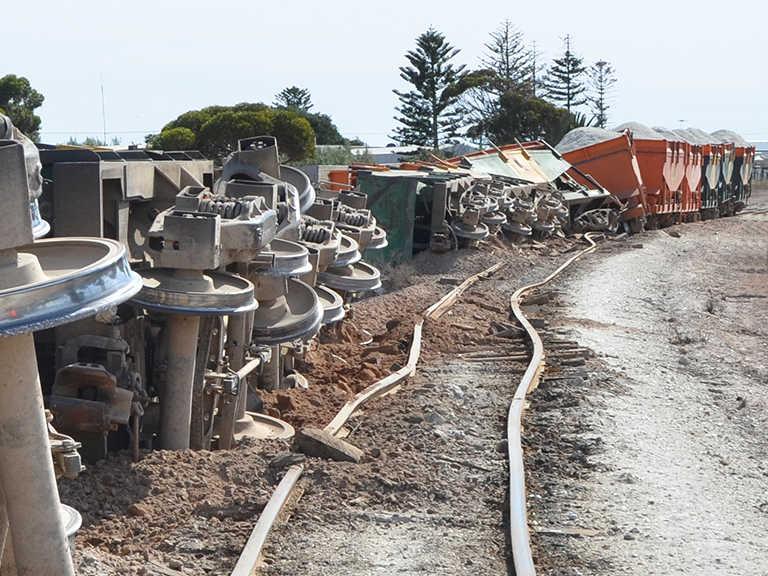 The aftermath. Photo sourced from the ATSB

I did some analysis on the cause of train derailments (most are due to worn out track), if you’re interested in finding out more about derailments, click here: https://econstructioncareers.com/news-insight/why-trains-derail

A turnout is where trains change tracks. There is a machine at the turnout point that moves rail blades in one direction or the other to force the train down that set of tracks. Turnouts can lead trains into sidings, branch lines, or the other direction of travel amongst other functions.

To read more about how trains change tracks, check this out: https://econstructioncareers.com/news-insight/how-trains-change-track

What confused me about this one was that we worked with a company which supplied turnouts. My question was, if a turnout is a way for trains to diverge, how can a company supply that? What they did was pre-assemble a turnout in a factory, transport it on a truck to site, then weld the rails around it into place.

Danger, do not enter. Most people get this introduction to the rail corridor.

The rail corridor is the width of the land allocated to the train line. It includes the train tracks themselves and usually some land reserved either side of the lines. The reserved land is usually used for cables, drainage, or storage of extra materials.

Trains are surprisingly quiet. When you’re working on the track, it’s hard to hear a train coming. This means that as you work, you have to keep one ear open to the shout of the lookout person when a train is approaching, you also only have 30 seconds to clear your tools before the train comes by.

What if you could guarantee no train would rush through while you were trying to work? This is a possession, also called a blockade.

Taking possession of a train line means to block it preventing trains from entering that part of the line.

On the first network I worked with, possessions would be guarded by a person holding a flag. No rogue train could enter. More commonly though I’ve seen people use a train to form a blockade at the entry to the work area, preventing other trains from getting past.

On train lines that use electricity to power and detect trains, ballast can serve as an insulator between the two rails. If the ballast weren’t there, electricity sent on one rail (used to detect trains) might wrongly be short circuited to the other rail. Ballast provides insulation to stop this happening.

Modern metros use concrete to hold the rails in place rather than ballast. It’s expensive initially, but lasts much longer.

The rail gauge is the term used for the distance between the two rails. There are different benefits to having the rails close together, or far apart. While many rail lines chose different gauges to meet these benefits, most lines today use a standard gauge. 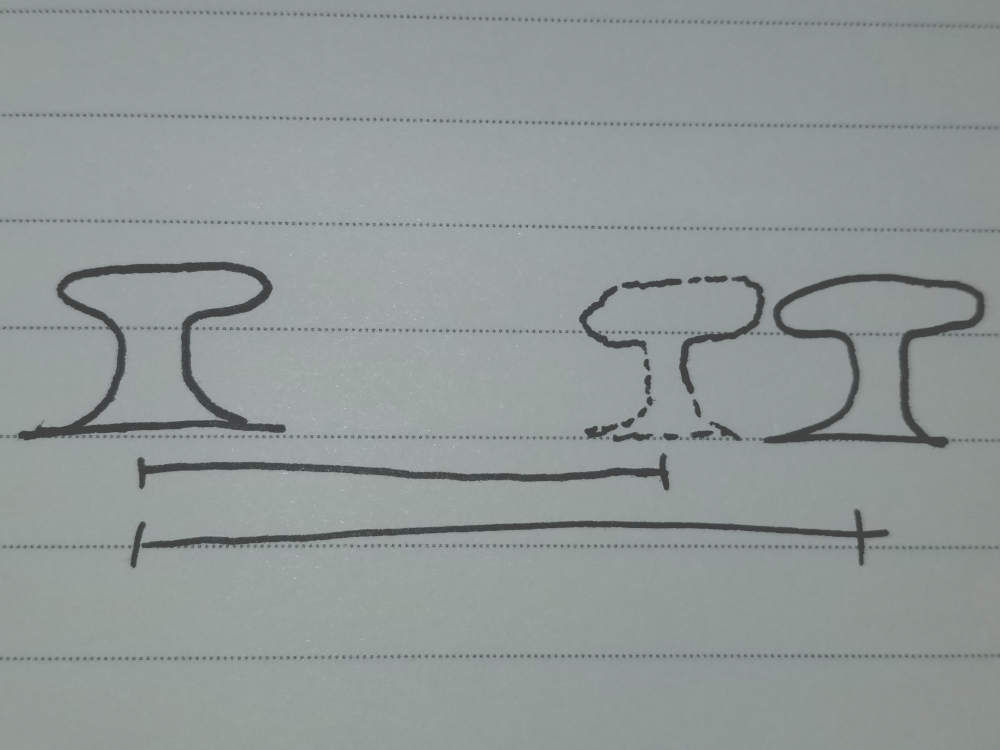 My hand drawn explanation of gauge

A siding is where trains park. Sidings can sometimes act like passing lanes on a freeway. A train can park in a siding to let a faster train overtake it. Sidings can also be used to park a train overnight, or so that cargo can be loaded or unloaded.

When parking a train in a siding the driver has to remember to put on the brakes. I have heard of a couple of cases where trains run away after being parked in a siding and the brakes haven’t been applied properly. In nearly all cases the system is designed to derail a train rather than let it roll onto the path of an incoming train. If you’re interested in finding out more about how trains derail, check this out:

My first job was with signals, but when I started out, I had little idea what signalling was.

Rail signalling is the system that figures out where trains are, and uses that to allow trains to travel along paths ensuring the trains don’t crash into each other.

Up and down are the common rail travel directions. On a straight train line, trains typically go ‘up’ in one direction, and ‘down’ in the other.

Not all lines have up and down, I’ve also seen: 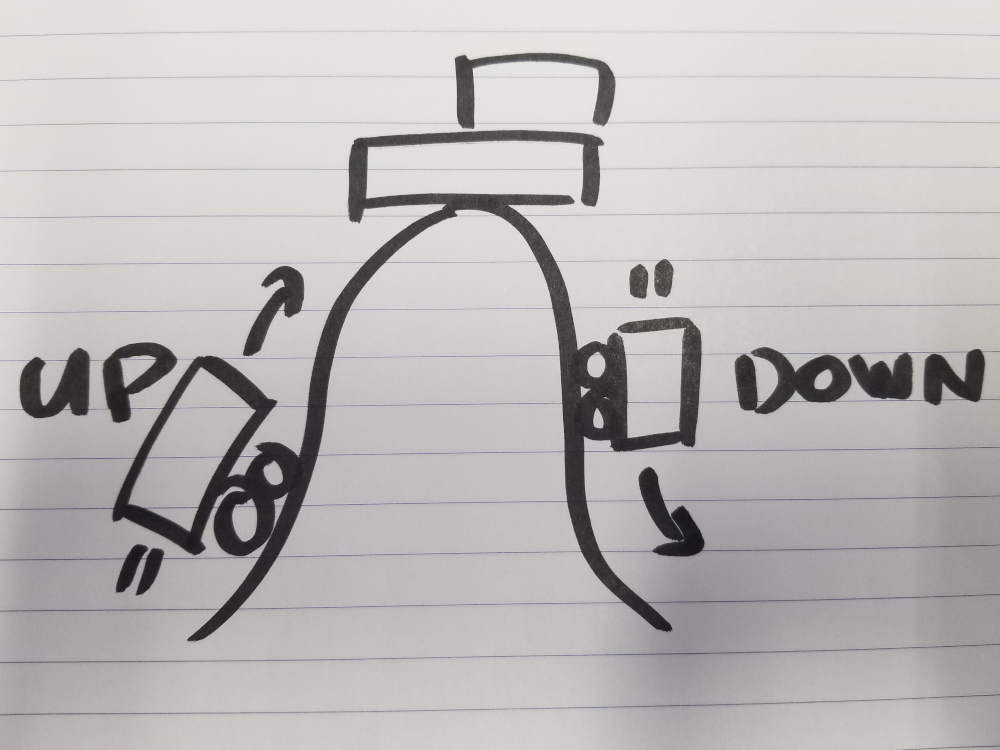 If you’re interested in joining the rail industry but not sure how to get started, we wrote previously about what jobs are available and how to get started. Click here to check it out: https://econstructioncareers.com/news-insight/rail-engineer-good-career