What Victorian jobs will boom thanks to the 2019 budget?

Written by JFP, updated May 28 2019 in accordance with our editorial policy.

Victoria laid down a budget this year packed with infrastructure spending. We took a look to see what we think the jobs growth will be over the next few years thanks to this budget. If you’re constructing roads, rail, or solar we’ve got good news for you.

They’re finally plugging the gap between East Link and the Ring Road. As of May, 2019, work is just getting underway for soil and groundwater testing. Design of the alignment, road, tunnels, and interfaces will also be progressing well.

We found some interesting areas to keep an eye on if you’re looking to get involved with this project:

The interfaces for this project are complicated!

Our interpretation of the diagram below suggests dozens of kilometres of new lanes adjacent to existing ones. The Eastern Freeway is an important road for Melbourne suburbs and traffic will have to keep travelling on it while the new lanes and ramps are constructed.

Traffic will need to be controlled around the site, and thanks to the level crossing projects, we already see huge demand for these jobs.

Speaking of traffic, computer systems are becoming more and more important in the management of traffic on motorways world-wide. Victoria is a pioneer in this field. I’ve been watching the drip feed lights on the Monash Freeway for many years, and now they’re coming to the Eastern.

While this isn’t as big an employer as construction traffic management, sparkies will still be in high demand to build and install these systems.

Trees! We think there’ll be huge demand for landscaping work thanks to the green bridges that are going to be part of the project. Green spaces were a big feature of Skyrail, now they’re popping up on the North East Link too: 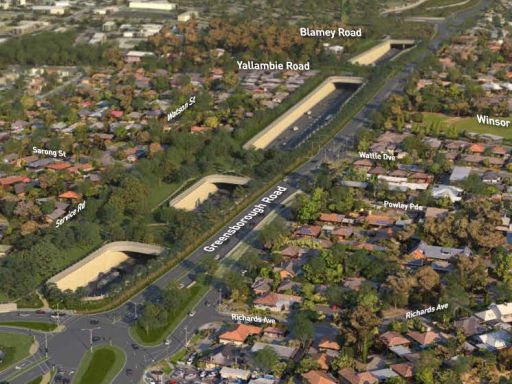 More level crossings to go! Business as usual for this one, the budget allocated more funding meaning a fresh rounds of level crossings are ready to be dumped. Many of these are still in discussion about how they’ll look (road over rail; rail over road?), we’ll need to keep our eyes peeled.

We think the jobs growth related to these will be thanks to Metro. Metro is upgrading its infrastructure and rail systems as part of the level crossing works and it needs help doing so.

The jobs to look out for here:

We’ve talked about solar before in our feature on jobs to do in an economic downturn. The Victorian government is throwing more money into getting solar panels on people’s roofs.

Not only do we think rooftop solar is set to boom, we reckon thanks to the shake-up of the Victorian energy regulator, there will be more large solar plants on the horizon (pardon the pun). The best way to get in on it is as an electrician. However laborers are also in high demand, particularly if you’re comfortable working at heights.

This is an exciting time for construction in Victoria. There are many more improvement projects in the pipeline, including small works that don’t attract the headlines but still require the people on the ground to get it done. Stay tuned for more!