Written by Chris, updated Jun 27 2019 in accordance with our editorial policy. 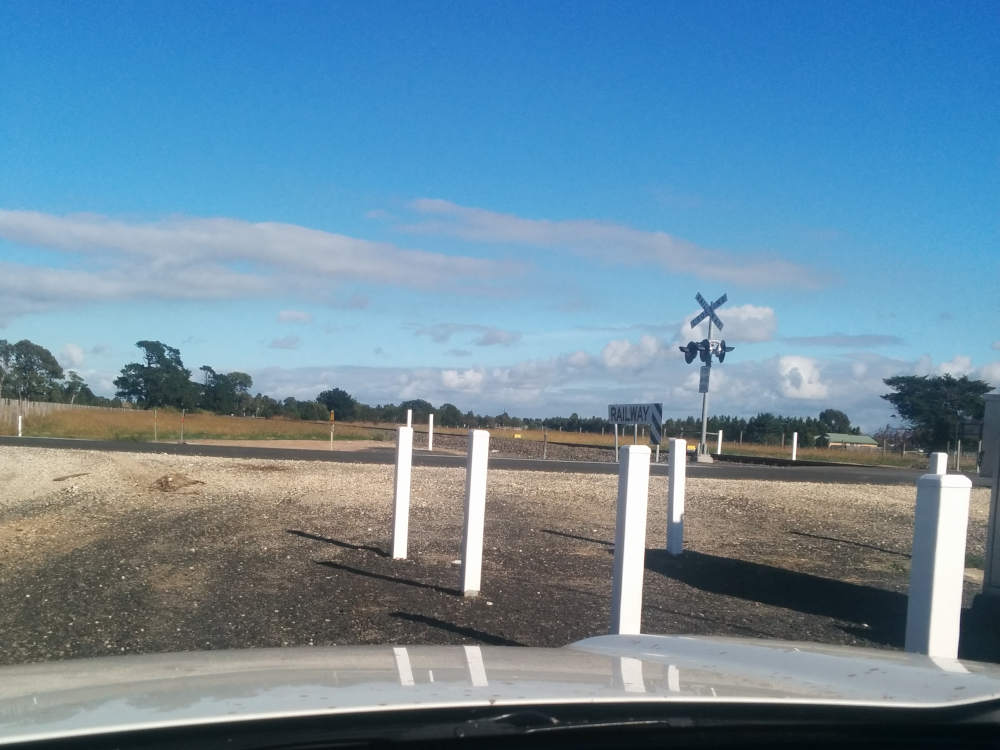 Trains activate road crossing signals when a crossing detects that the train is approaching. The crossing uses a signal of electric current to figure out if there is a train near the crossing, which direction the train is travelling in, and how fast the train is moving. This can be through a computer that calculates these based on the Doppler effect, or simply a current passed through a relay logic circuit.

Figuring out where the train is

The crossing knows where the train is using electric current. Traditionally, this is by passing current down one of the rails, and having the train short that current through its axles to the other rail. The line is separated into sections, and as the train travels along the line, it shorts the electric current only in the sections it occupies.

Approaching a crossing, the train will short out the electric current in the section that the crossing is monitoring. This is how the crossing knows to start closing.

A more recent form of detection uses the doppler effect on the electric current to calculate how far away the train is and how fast its travelling. This method is better where there is not already another method of train detection in place, usually in the countryside. Once the crossing knows the train is going to cross the road within a certain number of seconds, it initiates its closing process.

How does a crossing work 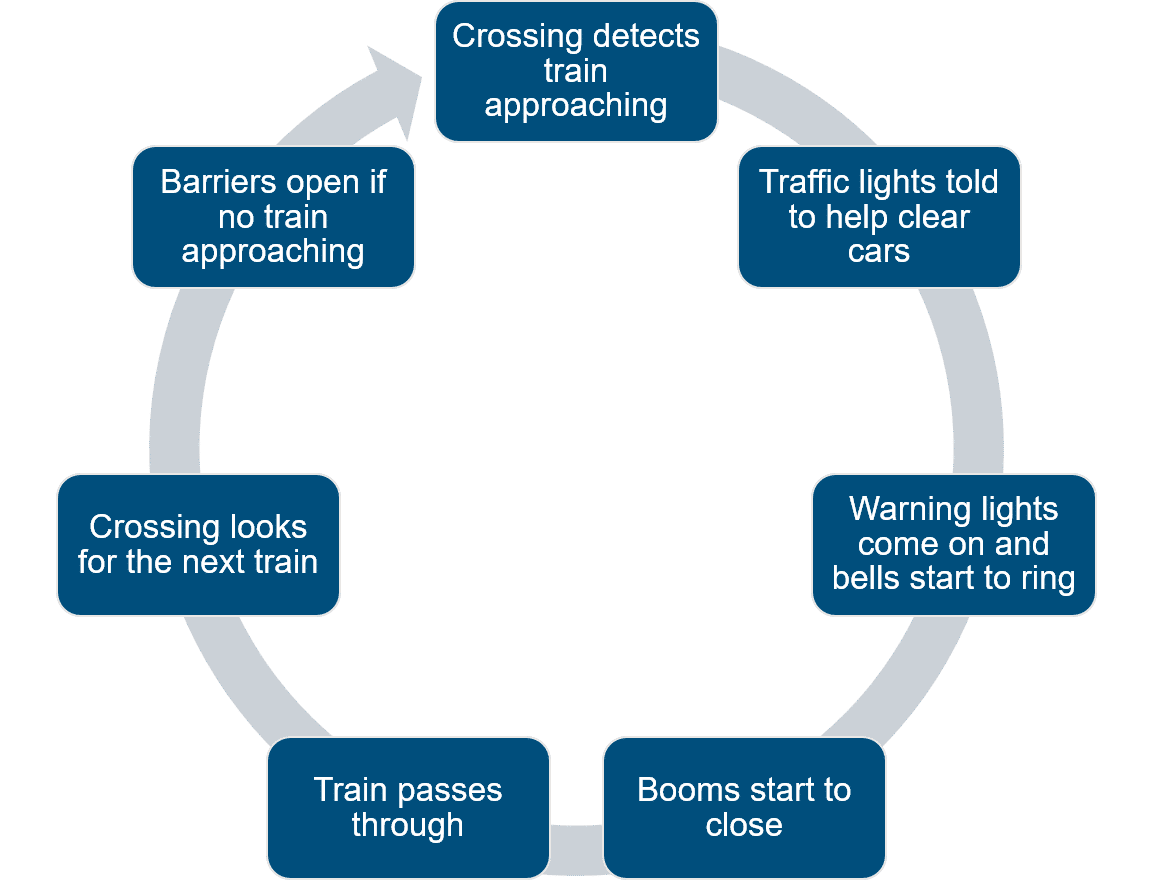 The endless cycle of the crossing

Once the crossing knows there is an approaching train, it activates traffic lights, flashes warning lights, and lowers boom barriers. Once the train passes, if there are no more trains in the area, the

Why do crossing stay closed for a long time

Cars need a “safe” amount of warning to clear the crossing. This amount of time is roughly 20-30 seconds depending on how much traffic there is, how fast the traffic is moving, and the position of traffic lights around the crossing.

The crossing looks out for trains travelling in the other direction as well. If another train is nearby, the crossing calculates it does not have enough time to open and then close again. In this case, the crossing remains closed.

If the crossing is broken, it will stay closed. This is industry practised default safe position - closing the barriers.

Cars are not allowed through a broken crossing. There is no warning for the car driver that a train is coming. If a train strikes a car, it is likely the car will end up far worse off.

To get if fixed, call the police (preferable non-emergency), or call the rail operator (they might not know).

The crossing has been down for 10 minutes, no train is coming, can I drive around it?

What to do instead of driving around the booms

Try to find another way to cross the train tracks - a different road, a bridge, or an underpass.

Report the issue to the rail operator. Only some of the lines I’ve worked with have automatic warnings for the operator if a crossing is stuck down. On other lines, the best advice is to call the rail operator, or call the police on a non-emergency number.

Why do trains spend so long parked on crossings

When a train is parked on a level crossing the most likely reason is that the train is waiting for the path in front of it to be available before it can move on. Trains often stop on parts of the network while they wait for the track ahead of them to be ready. Unfortunately on some networks, this includes being parked on a crossing.

The track ahead may be blocked by another train, or the track is set in the wrong direction for this current train. Waiting for the blockage to clear, or having the track set in the correct position are the only ways the train will be allowed to move again.

A train can move when it has been given the right route, and that route is safe to take. A train parked on a crossing hasn’t met one of these two conditions.

How do we fix crossings?

In my career, I have only worked on one train line that installed a new crossing. This crossing allowed the train controller to reach the office. Given all the risks involved, few governments are willing to agree to brand new crossings when it can be avoided.

For crossings already in place, people are working to make them safer, and to reduce the amount of time people spend waiting on them. The best option though is to remove the crossing: Cut one to run below the other, or build a bridge to go over.

Maintain the ones that are already there

Crossings are complex systems of electronics and motors. The parts inside break down over time and need to be repaired. When the parts fail, the crossing becomes stuck down.

I’ve written previously about some of the jobs available in rail, take a look here if you’d like to know more: https://econstructioncareers.com/news-insight/rail-engineer-good-career

What are the alternatives to crossings?

Build a bridge; build an underpass. No matter how far technology advances, these are the only solutions to the rail crossing problem. Unfortunately they’re a bit expensive.

I learnt recently about a train in Michigan City, Indiana that has a train running down the middle of the road. Does it count as a crossing if the road and the rail are always together?

This isn’t a tram, it’s a train running through the street! Source

If you want to know more about the differences between trains and trams, click here: https://econstructioncareers.com/news-insight/train-tram-difference

Road rail crossings are a frustrating relic of a time when there were a different set of priorities for urban and freight transport. As it becomes cheaper to build tunnels and bridges, hopefully the efficiencies of our cities will cease to be further impacted by the rail crossing.