How train drivers know when to stop, explained with pictures

Written by Chris, updated Aug 27 2019 in accordance with our editorial policy.

A train driver knows when to stop the train because the train is approaching a stop signal, or the train is approaching a platform. The driver knows when to apply the brake due to having studied the route and experience driving this type of train. Markers are typically found on station tracks to help the driver line up the doors, and red signals often stop a train automatically if it moves past.

Trains take a greater distance to stop than the drivers can reliably see. Train drivers must apply the brakes knowing where they will have to stop, even though they may not be able to see that point. Trains cannot come to a sudden stop like cars can. 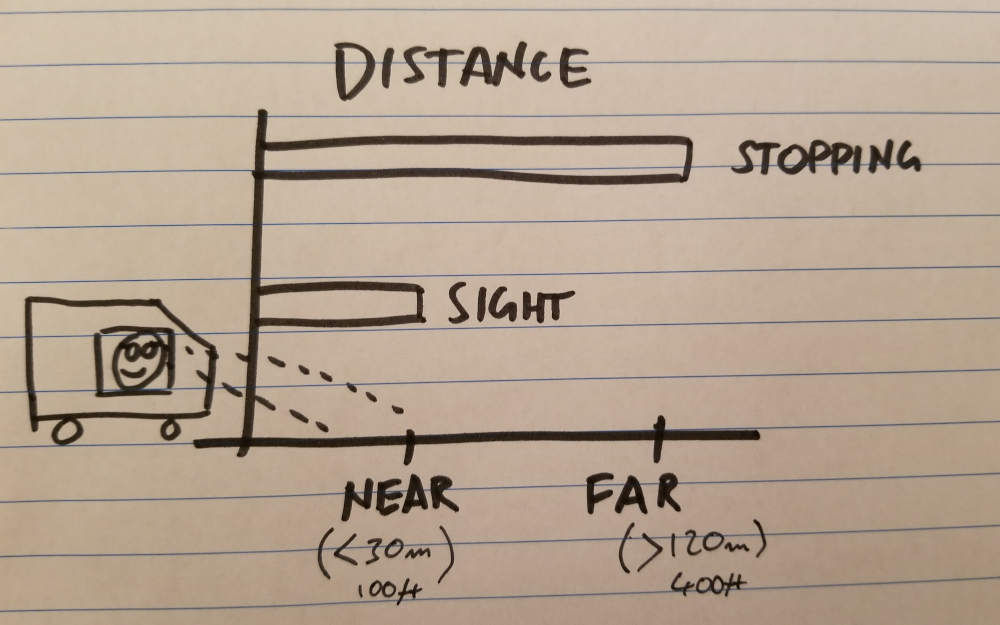 How does a train driver know when to stop at a station?

Train drivers know when to stop at a station because they have spent a long time studying their route. 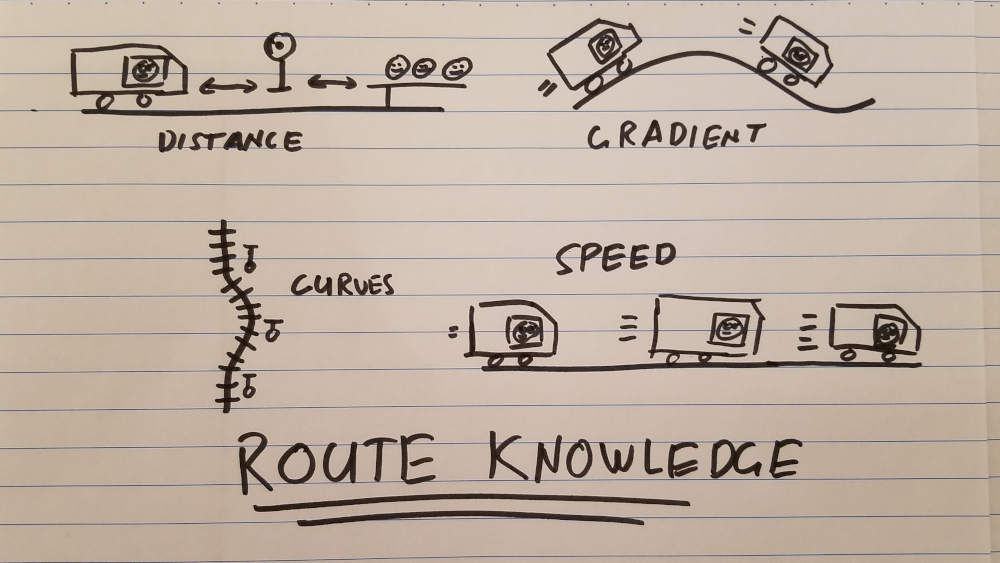 Train drivers study and develop detailed knowledge of their routes

The train driver knows when the train is approaching a station. Given all this knowledge of the route and the train, the driver knows exactly when to apply the brake.

Some drivers I’ve talked to use landmarks to help them figure out when the next stop is approaching. Often this is something fixed, such as a particular building. These drivers avoided trees and signs in case they were cut down or moved.

At each station, train drivers aim to line up the doors for the passengers consistently.

Train drivers look out for markers or lines painted on the tracks or platform to line up with as they are stopping. Experienced train drivers will know how to apply the brake to come to a gentle stop at the consistent point. 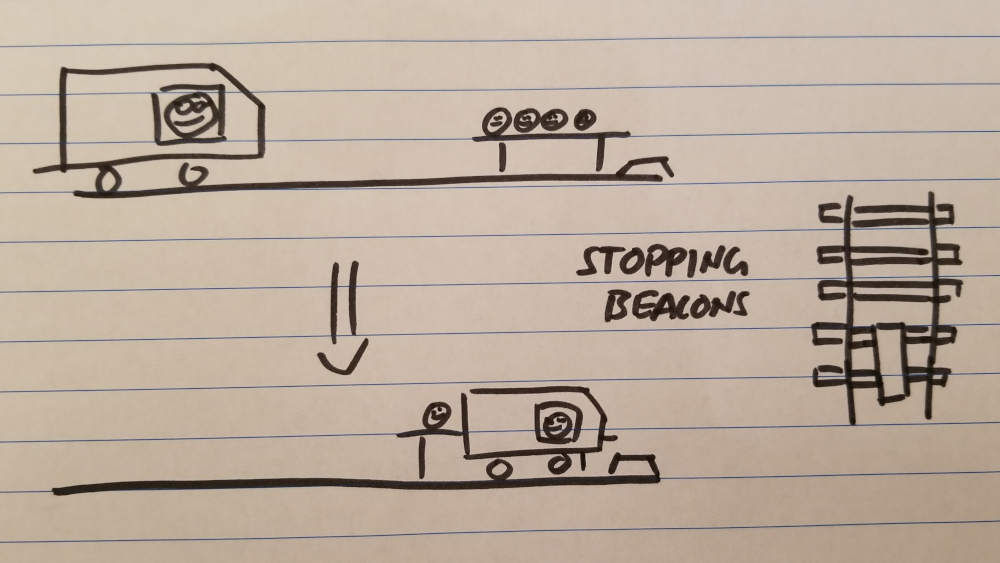 When computers assist with train driving, the computer uses positioning beacons to figure out where the train is, and how far it has to travel to achieve that perfect platform stop. The beacon sits on the tracks at a known location, when the train travels over the top it can calculate how much brake it still needs to apply to stop in the correct position.

Computer systems I’ve worked with can line up the doors with the platform, to within 25cm, over 99% of the time.

How does a train driver avoid colliding with another train?

A train is not allowed to pass a red signal.

A red signal means it is not safe for the train to proceed. Often this is because another train is on the tracks ahead.

The train driver is given a warning that the train is approaching a red signal and needs to stop. This is usually in the form of a yellow signal. A yellow caution like this means that the train can proceed but be ready to stop at the next signal.

How does the train driver know where the next signal is located?

That same route knowledge that the train driver develops to stop at stations. By spending a long time studying the route, the driver knows how far in advance to apply to brake so that the train can stop at the red signal.

Rail signalling is about a lot more than red, yellow, and green lights; I made this visual guide to what rail signalling is and how it prevents trains colliding: https://econstructioncareers.com/news-insight/rail-signalling

What if the driver can’t see the signal? It might be sunny.

Sighting signals is an important step in the process of designing and installing the signals.

Signals are checked to ensure the driver can see them at day, night, and with all the positions of the sun. Drivers can also report to have a signal location reviewed if it becomes obstructed.

It is important that drivers are able to see a signal from far enough away to act if they need to. Working with the drivers to check they can see signals is an important part of a signalling project.

How a red signal stops a train

Many rail lines have a feature where if a train passes a red signal, the train will automatically stop. This is a form of automatic train protection.

This automatic train protection can be: 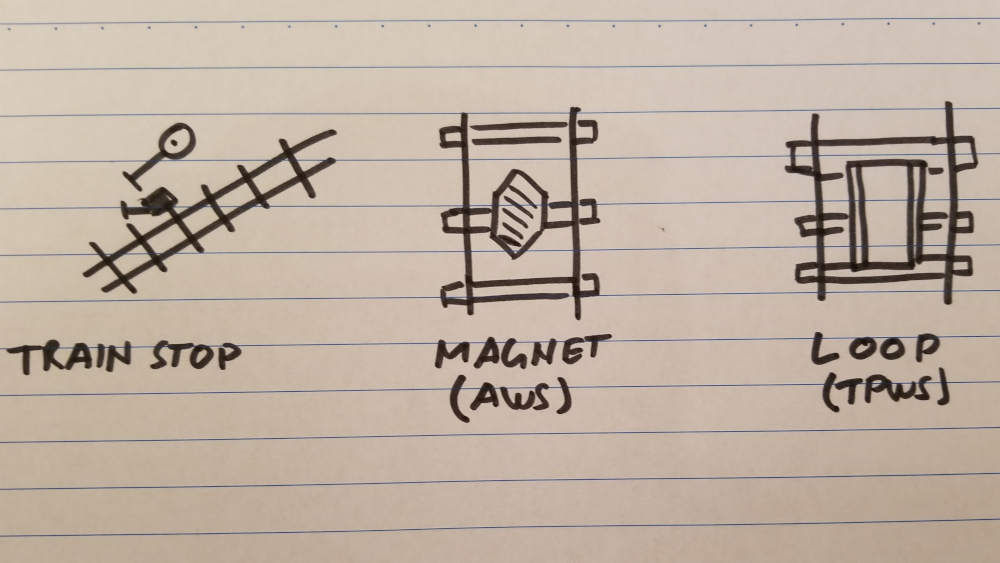 Train stops, magnets, and loops tell can tell trains when to stop

As computer technology and automation works its way into trains, these systems become obsolete in favour of communications technology such as GPS and Wi-Fi. Trains can already be controlled by computers, and drive themselves to avoid collision. I believe the up-take of this technology will continue.

Can train drivers be replaced by automation, computers, or AI?

Yes, it’s been done successfully for both freight and passenger trains.

Automatic systems are capable of driving trains, commanding the train to stop, ensuring trains do not collide, and opening and closing doors without injuring passengers.

Most automatic lines need a little extra protection for people. When train lines are accessible, people tend to wander across rather than use a crossing. While a train cannot stop in time to avoid a collision with these people, a warning horn sounded by a human driver might scare them off the tracks in time.

Automatic lines I’ve worked with usually sit on viaducts running above roads, or in tunnels running below cities. This naturally prevents people wandering across the lines.

If drivers are replaced, what are the jobs left for humans?

Maintenance. Humans are still needed to maintain the system.

When a part breaks down, a human has to fix it. When something wears out and needs replacing, a human needs to replace it.

I have never worked on the perfect system - they all need maintenance.

In more detail, I put together a list of jobs that I believe won’t go away as automation increases in the rail industry. Check that out here: https://econstructioncareers.com/news-insight/automatic-trains-5-human-jobs

Trains are heavy, they take a long time to stop. Trains stop at a red signal, and they stop at a platform. A train driver must learn every point along their route and the characteristics of their train. The driver uses this knowledge to know exactly when to stop.