Written by Chris, updated Jul 03 2019 in accordance with our editorial policy.

Trains avoid collision by following a simple rule: A train cannot move forward until the driver is sure there is no train on the path ahead. Train drivers, even automated train driving computers, are protected by rules that only allow the train to move when there is no train ahead. Helping trains move within the rules of this safe protection are signalling systems.

Why do trains need rules for a clear path?

Trains take a long time to stop. Longer than a train driver can see. If the driver can’t see the train in front, the trains might collide.

Imagine driving a car in fog. It’s hard to see far ahead, so you slow down in case you need to stop suddenly.

A train driver also has this problem of not being able to see. Even on the clearest day, the driver’s eye cannot see for the distance required to stop the train. The choices? Slow the train down, or implement a system that assures the driver no train is in the way.

Trams, another vehicle that runs on rails, don’t always have this problem. The distance it takes to stop a tram is a key difference between trams, streetcars, and trains. If you would like to know more about the difference, check this one out: https://econstructioncareers.com/news-insight/train-tram-difference

How does the driver know there is no train on the path ahead?

Every train network has a set of rules that tell the driver when there is no train ahead.

That could be as simple as a piece of paper that says the track ahead is clear. Or it could be a message from a computer that has checked the line ahead to make sure there are no trains in the way.

In a more manual system where paper, tokens, or the like are used, people are relied on to figure out where trains are on the network. The people can then sign the paper, or give out the tokens to train drivers letting them know where it is safe to go.

In a more automated system, trains can be detected using electric circuits or fields, radio signals, or even by having the train calculate its own position and report it back using Wi-Fi. Once all other trains are detected, the driver of any train can be told where it’s safe to go - the driver will know there are no other trains on the path ahead. Telling the driver of a train where it is safe to go is called signalling. 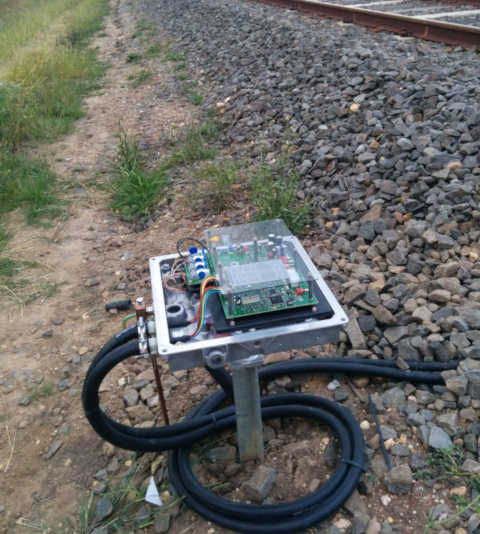 Train detection electronics installed by the side of the line

How are the trains detected?

Automatically detecting trains answers a different question: Where are the trains NOT in a section of track.

An electric current is run through the rails. When the train wheels touch the rails, the circuit is shorted and the electricity stops flowing. If the electricity doesn’t flow, the system assumes there is a train there. This also protects trains in the event of power failure, when the system can’t determine at all where the trains are.

A modern alternative using Wi-Fi: The train communicates constantly with a central server, reporting the train’s current position. To calculate the position, it uses a combination of a built in odometer, and beacons that are fixed between the rails. The odometer measures the distance since the last station, but it can develop errors as train wheels shrink from wearing out. Fixed beacons are in place at known locations on the track to fix this error.

Preventing trains going forward when there is a train ahead

The easiest way to prevent trains entering an occupied section is to close that section off to other trains. In a straight piece of track, this is easy: Stop one train entering a section until the train ahead has left.

If the line allows trains to change track, a train might enter an occupied section. To prevent this, trains aren’t allowed to change track until it is proven that the track they are entering is clear. I wrote more about how trains change track, click here to check out that article:

Another way is to trigger the emergency brake on a train as it enters a section which is not confirmed empty. This can be done mechanically with a lever set by the side of the train, the leaver is only lowered when the next section is safe. 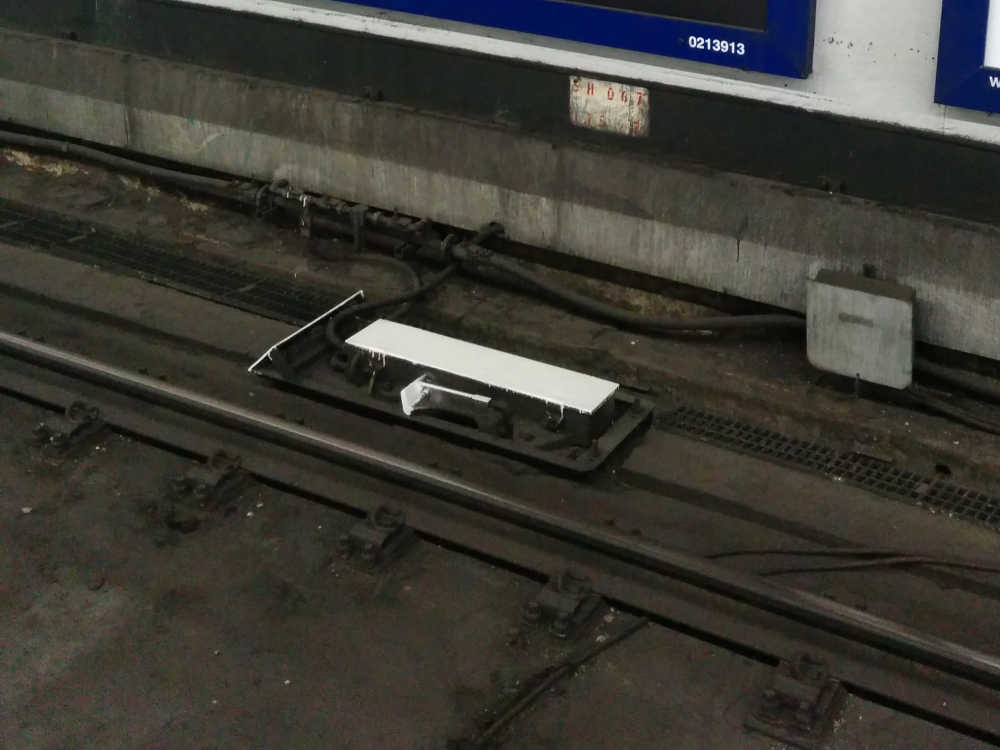 A mechanical lever that, when raised, prevents trains going past

A self-driving train is stopped by the absence of a computer command. If the central server fails to tell the train to proceed, the train automatically stops.

How do trains crash if there are safe protection rules?

Even the most automated systems still rely on people at some stage. People design and build the system, and people maintain it when it’s operational. While in my career I haven’t seen anyone injured from breaking the train protection rules, I have seen the rules broken and heard stories.

Machines and automation can help prevent some of those mistakes. Automatic systems can break down though, and they have to be installed or repaired by people.

Whenever there is a human in the system, there is a greater opportunity for something to go wrong. We make mistakes, we miss things, and we forget. While we can often rely on the system for protection, every incident I’ve worked with has been a cascade of failures that led to the result. Luckily I’ve never seen a serious incident.

Even the most automated systems are not immune to bugs. That cascade of failures can often include bugs in computer systems.

Less mistakes are made by machines. If you replace the people with machines/computers, less mistakes will be made. But what about when computers break down?

Manual override is necessary for train protection rules. There are some normal operations which can’t be protected against, such as joining two trains together. Joining two trains would be impossible if the system prevented one train from moving into position against the other.

Relying on people can be good though, it means we have jobs. Automated rail networks employ many people in the design, construction, and operation of a good rail service. I wrote about the sort of jobs that can be done on an automated rail network here:

Derailments, thankfully, are not often caused by signals, train control systems, or people. I analysed 4 years worth of data to find out what does cause derailments, you can read about that here: https://econstructioncareers.com/news-insight/why-trains-derail

Why else are train signals important?

By assuring the train driver (person or computer) that there won’t be a collision, trains can run closer together on the line.

Giving the train permission to go forward can be done by a person writing on a piece of paper, or it can be done through a system of lights and communications.

The more automated the train signalling system, the less it relies on people to operate the trains safely. People get tired and make mistakes, computers and automated systems don’t. By letting an automated system or a computer calculate and communicate to the train when it’s safe to proceed, trains can run closer together knowing they won’t collide. The computer protects the trains from collision.

How do train signals work?

The traditional coloured lights and levers tell the train driver how far the train can move safely. On some of the networks I’ve worked on, these signals can also tell the driver how fast to go.

Each network has its own rules about what the signal lights mean, but in general I’ve seen:

The signal knows which colour to show based on whether there is another train on the route ahead.

In modern systems, train signals can be sent directly to the train, either showing on a driver’s panel or being interpreted by the train computer. The idea is the same though. A signal which permits a train to proceed will only be given if there’s no other train in the route ahead. 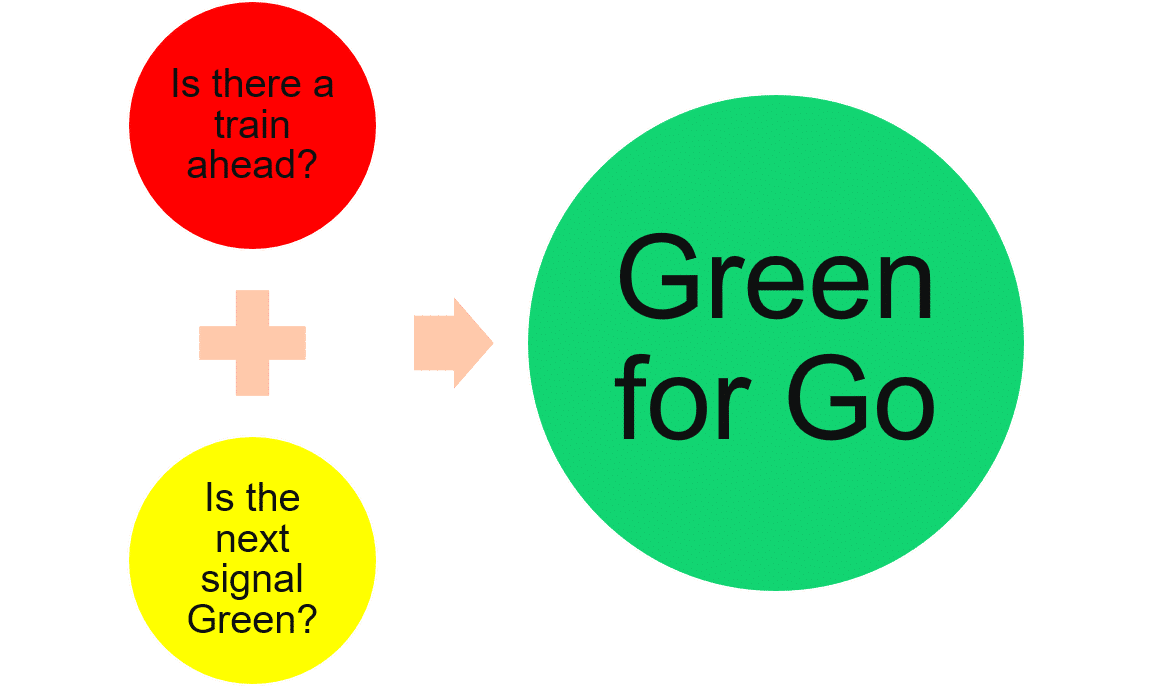 If train signals are being automated, what are the jobs left for people?

Computers can drive trains. Computers can automatically protect trains. Yet there are still jobs for people. Check out what I wrote previously about this: https://econstructioncareers.com/news-insight/how-automatic-train-control-works

People are still required for:

How to get a job working with train signals

Modern train signals, or train control systems, are mostly combinations of electrical, electronic, and computer systems. My pathway started with a degree in electronics; many of my colleagues have degrees in software; some didn’t go to university at all.

An electricians apprentice is a great way to get started. Even if that electrician doesn’t do industrial, safety critical, or rail work, you can always switch later.

If you’re a qualified electrician looking to work in rail, get in contact with one of the contractors already certified for rail work. Like many industrial electrical fields, rail has specific requirements to uphold high standards of safety and reliability. Many of the rail networks I’ve worked on require certification, and the best way to get this is through a company already working on rail.

I wrote another article about how you can get a job working in rail, and that includes some of the big players you can get in contact with, particularly if you’re in the US or UK. Click here to check out that article: https://econstructioncareers.com/news-insight/rail-engineer-good-career

Trains avoid collision by having a system of rules that tells the driver there is no other train in the path ahead. Collisions are exceedingly rare as long as these rules are followed. Modern train systems use computers and automation to ensure the rules are followed, further reducing the chance of collision and allowing more trains to run on a line. Automating train control doesn’t mean people are out of a job however, there are still jobs for people to do on highly automated systems. These jobs include designing, installing, and maintaining the train control system.